For more than a year, Phebe Dennis-Fortt has collected mattresses, clothing and other items with one goal in mind– to send them to war-torn Liberia, her home country in western Africa.

She has kept the goods at home in Modesto and in a storage unit as she tries to raise money to ship the goods to a hospital in Liberia.

“I may need about $10,000 to get the whole thing done,” said Dennis-Fortt, who hopes to raise more than $3,000 through a fashion show at Tracy’s Masonic Temple on Aug. 21. She estimates she has about a thousand pounds of clothing to ship over.

The items will be sent to a hospital in Kakata, a town of 100,000 about 50 miles from the capital of Monrovia, she said.

Dennis-Fortt, whose husband, Ronald Fortt, is part owner of Tracy Toyota, formed Relief, Inc. about a year ago and began working with acquaintances in Liberia to get the project going.  “I needed to give something back home,” said Dennis-Fortt, 43, who immigrated to the United States in 1980 to attend school, right after a  military coup that marked the beginning of decades of violence in Liberia. “We’re just trying to give them a jump-start on life.”

She went to visit her family in 1989, a year before her father, a businessman in the city of Careysburg, died after he and his family were forced from their home into a hideout. He left behind 12 children, many of whom now live in the United States. Her mother also died during the war, she said.

Dennis-Fortt said she chose the hospital in Kakata because it’s in an area that has not received much help.

The hospital was abandoned during the war, so patients wait for help on the floor, she said. Doctors and nurses donate their time to work there, she added.
Catherine Page-George, a Liberian resident who is helping Dennis-Fortt, said a truck will take the shipment to Kakata.

“The road is not bad,” she said by phone from Liberia.

The number of relief organizations in the country is increasing, said Page-George, an employee at the U.S. Embassy in Monrovia.

But the U.S. State Department’s Web site cautions U.S. residents not to visit Liberia for the nonessential travel.

Liberia, a country of about 43,000 square miles, is slightly larger than Ohio, according to the state department Web site.

Free Slaves from the United States established its first settlement in 1820 in Monrovia, named after U.S. President James Monroe. About 75 percent of the population is unemployed and illiterate. 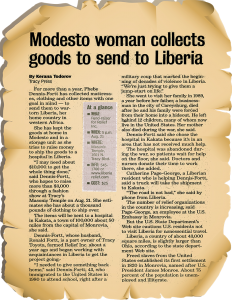